Gateway to the famous Blackwood Valley 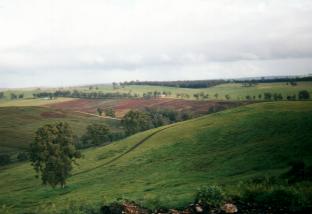 235 kilometres south of Perth and is the northern gateway to the beautiful Blackwood Valley. Mullalyup is a picturesque, two and a half hour drive from Perth and the changing seasons bring wonderfully varied vistas from blossom to fruit bearing trees, hundreds of acres of vineyards, mist through the rolling green hills and beautifully coloured autumn trees.

Our settlement offers extremely talented crafts people, unique styles of accommodation, locally grown fruit and vegetable sales, general/fuel store and recreation areas for tired travellers.
We are situated within a few kilometres of the Bibbulmun Track and are on regularly serviced bus route. The Balingup Golf course is on our doorstep.
There is seasonal work to be had in the numerous orchards and vineyards in the area. accommodation is available.

1860 - William Coverley, his wife and two children arrived in Mullalyup and took up land, Nelson Loc 23 which he called "Elm Grove".

1890's - 500-600 men were employed to construct the railway line from Donnybrook to Bridgetown, with siding at Mullalyup and Balingup.

1895 - Jacob Hawter took up land and established the first and largest nursery and by 1910 had over 100 acres of orchard in production. at the first Balingup Show, Hawter had 170 varieties of fruit on display. He was also one of the first directors of Wesfarmers.

1907 - Mullalyup Agricultural Hall opened in November with a Grand Ball.

1919 - Mullalyup War Memorial was erected and dedicated to persons who served in the Great War (WW1). A re-dedication ceremony was held on 11th November 1996.